A University Student challenge me on how there was no way all those animals could fit on Noah's ark, so I had to do some research and to my surprise, it was not hard at all to do the math on it.

However, before we get into the numbers, we must first remove the misconception the evolutionists hold to and that is that Noah had to fit two of every species into the ark, but that is not what scripture says. It says 2 of every "kind." Actually scripture says 7 of the clean "kinds" and 2 of the "unclean" "kinds".

What is a "kind". We have great examples of what a kind is and how a multitude of species can be traced back to their "kind." For instance, while lions and tigers are considered their own species, they can interbreed. SO too can the many species of chickens, as well as llamas and camels. Due to genetic loss and isolation, interbreeding of these "species" is today limited, but going back in time, we see they came from the same "kind." 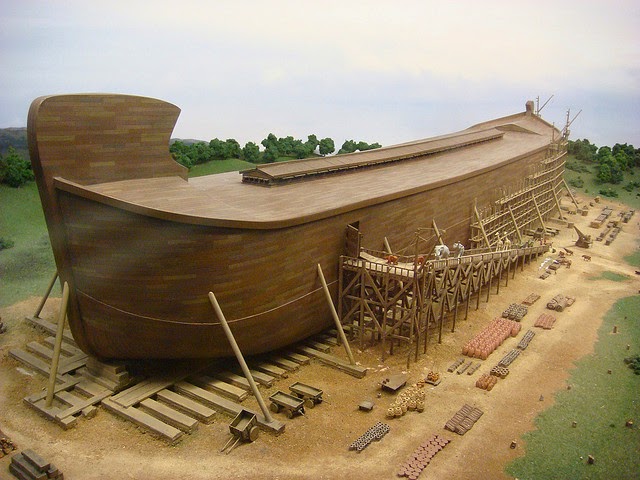 Creation scientists have done deep research on the issue and is available here at Answers In Genesis. They've narrowed down the number of kinds to 950. For arguments sake, greatly in favor of the evolutionists, we will more than double this number to 2000 "kinds". Since the ark is 450'L x 75'W x 45'H, this gives us 1.5 million cubic feet of space on board the ark.

Now to figure how many animals to divide into that 1.5 million cubic feet of space. The Genesis account states that Noah was to take 7 of the clean and 2 of the unclean kinds. Given most land dwelling animals are of the unclean kind, this should give us about 10% of the animals to count out of the 2000 kinds as clean and 90% unclean, but again, for arguments sake, let us double that number to 20% of the 2000. This is now doubling the numbers twice in favor of the evolutionists. So 400 clean and 1600 unclean. Here are the numbers - (7 x 400) + (2 x 1600) = 6000 animals